News may be changing – but the basic skills of journalism are not.

Rory Cellan-Jones, a Business Journalist who started out at Wales Online in 1983, told JOMEC students about the fast changes taking place in the news industry last week.

Despite unprecedented changes to the news industry, he said the core skill set in journalism will remain the same. The ability to to turn pieces around in a hurry and solid logistic skills with a thirst for accuracy are essential to the trade.

Added to this are the new pressures of being able to write for new platforms such as twitter, interacting with more readers online and understanding copyright law for the likes of flikr and facebook.

And just as we thought things were challenging enough, he said there must be an allowance to experiment with technology such as online video editing, audioboo, blogging and SEO.

New technology and the democratisation of information may also have an effect on business and financial matters.

There is the possibility, for example, that sensitive financial information could be leaked onto the internet, which could in turn, affect share prices if the blogs prove to be trustworthy.

Mr Cellan-Jones also highlighted the fact that the status of Google as a non-involved media engine is continually being questioned. 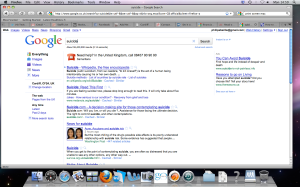 The number for the charity group ‘Samaritans’ is shown when a search is made for the term ‘suicide’.

Google TV is a major new development that will change the way we consume visual media. People may no longer look to watch TV on channels, but snippets of their favourite show.

So as technology beings to blur the boundaries of journalism, the new generation of journalists must strive to focus on the basics, to save the trade from deterioration of hard news skills and to inform the world of what is going on in an accurate and balanced manner.